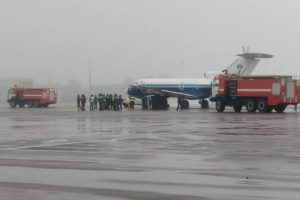 Motor Sich Airlines Yak-40 collided with a ground power unit truck at Kiev airport in Ukraine. As a result of the collision, the car turned over on its side. The accident happened during manoeuvring at the airport with people on board. Fortunately, there were no injured people during the collision.

The flight M9254, which had to depart from Kiev to Odessa at 9:50, was postponed at 2:00 pm. Information about this information was confirmed by the spokeswoman for the airport, Galina Bogdanenko.

“According to preliminary information, the incident occurred due to the pilot’s fault, which started the movement without the corresponding team”, added Galina Bogdanenko. She noted that the circumstances of the accident are now being clarified.

The Yakovlev Yak-40 is a small, three-engined jet airliner. It is the world’s first turbojet passenger aircraft for local airlines. It was developed in the USSR in the 1960s. At the moment it is one of the oldest operating passenger aircraft.