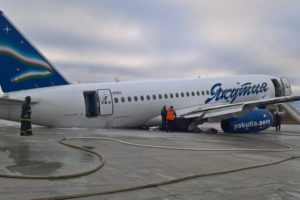 Fortunately no fatalities or serious injuries were reported during the accident. All the people were evacuated by the rescuers from the damaged aircraft and transported to the airport.

The aircraft Sukhoi Superjet 100-95B of Yakutia Airlines was performing flight 414 from Ulan-Ude Airport to Yakutsk Airport.

Yakutsk Airport’s runway 05R threshold was displaced by 1150 meters due to reconstruction. Runway 23L was available for landing only with a Landing Distance Available (LDA) of 2248 m. Additionaly, the touchdown zone lights of runway 23L and runway centreline lights were unserviceable.

After the incident, Yakutsk Airport was closed for several hours, with at least three flights forced to divert to alternative airfields, and several outbound flights delayed.

The Sukhoi Superjet 100 is a fly-by-wire twin-engine regional jet with 8 (VIP) to 108 (all economy) passenger seats. With development initiated in 2000, the airliner was designed and spearheaded by Sukhoi, a division of the United Aircraft Corporation, in co-operation with several foreign partners.