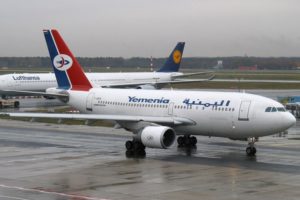 Airbus A310-300 of the Yemen’s national airline Yemenia suffered oil leak of engine PW4156. The airplane was en route from Aden in Yemen to Cairo in Egypt with 180 people on board, but on 450 miles north-northwest of Aden and almost abeam Eritrea the crew was pushed to shut down the engine after heavy engine oil leak. The pilot decided to return back to Aden with one engine running only. The airplane landed safely lack in Yemen and all the passengers were transferred to another replacement aircraft.

The local authorities initiated investigation for the root cause of the accident. The airplane will be inspected before allowed to return in service.

Fortunately there were no reported injuries and no damages to the airplane during the accident.

Airbus A310-300 (registration 7O-ADW) is a medium- to long-range twin-engined wide-body jet airliner. The aircraft has a two-crew glass cockpit as standard using CRT displays in place of the more traditional instrumentation as well as modern electronic systems. Airbus A310-300 provides an increased Maximum Take-Off Weight (MTOW) and an increase in range, provided by additional centre and horizontal stabilizer (trim-tank) fuel tanks. This model also introduced wingtip fences to improve aerodynamic efficiency.